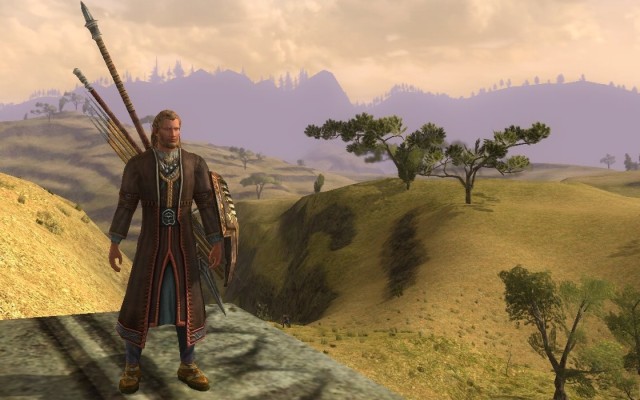 It was a great weekend in Middle Earth.  My Warden, above, has reached level 22, and the wife and I are making things right in the Lone Lands.  He’s been crafted some level 21 weapons, the spear and javelin on his back.  He’s still using the level 15 class quest shield.  He’s wearing slightly out-of-date gear, level 16 stuff crafted for him, beneath the cosmetic (level 20+) Ranger Cloak, and my Warden Backpack (also a cosmetic item) provides unlimited javelins (well, not really, they’re just for show).  He prospects ore and harvests wood to support the crafters supporting him.

Those crafters, are my burglar Aelwald, who can prospect at the same level now as the warden, and is now crafting both metal and wood weapons in the level 20’s range, and my champion, Angthir, who is on the quest to master his tailoring (to allow level 20’s gear creation), but that requires killing some elite level 25+ aurochs for an item to drop.

I’m having fun, in other words.  Our Warden and Rune-Keeper couple are making hash out of mobs 4-5 levels higher than them, and even handling elite mobs for fellowship quests, if done carefully, aren’t difficult either.

The more I play, the more I’m liking it.  Maybe it’s because it’s doing a fine job of keeping the obsessive-compulsive inside me busy.  And since the crafters rely on the harvesters, and you can’t do everything alone, in order to keep my characters in gear and weapons I need to play three characters.  And the altoholic in me says “Thanks!”

Gamer. Engineer. Lived lots of places.
View all posts by Kinless →
This entry was posted in LotRO. Bookmark the permalink.